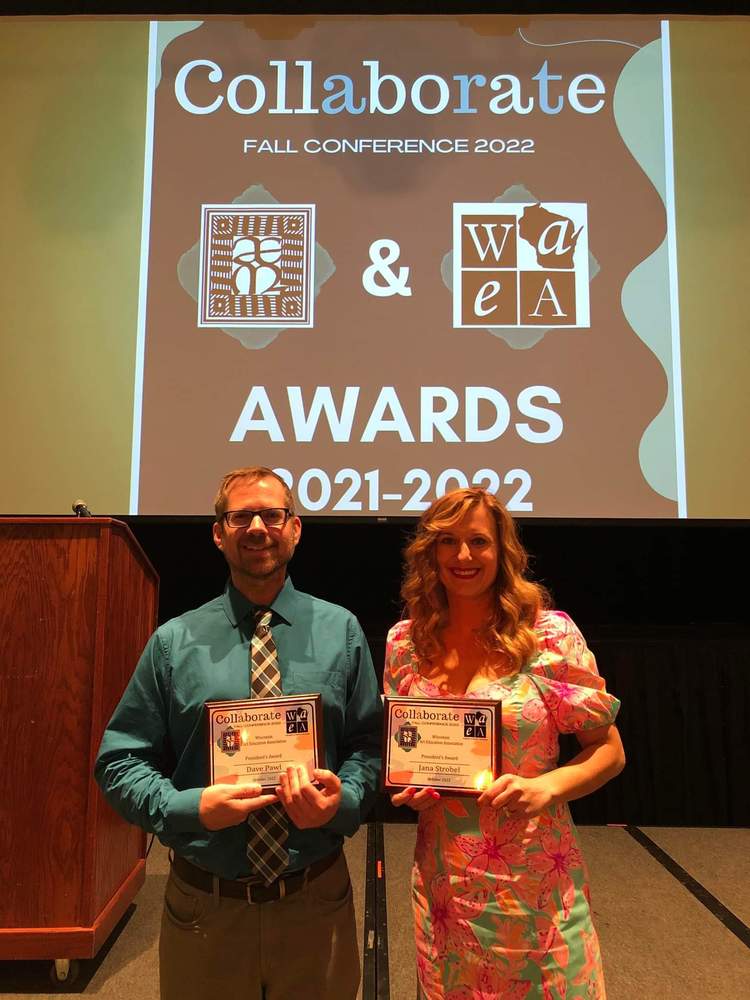 Watertown High School art educators Dave Pawl and Jana Strobel were both awarded the Wisconsin Art Education Association President’s Award for 2022 for their contributions to Art Education in the State.  Jana and Dave are co-advisors of the WHS chapter of National Art Honors Society as well as the Visual Arts Classic team. They host the Watertown Art Walk, Chalk the Walk, Student Art Showcase, and Arts, Beats, and Eats.  Their students have received recognition in the State Youth Art Month Exhibit, Scholastic Art & Writing Contest, and Arts for All Wisconsin.  They are presenters annually at the Wisconsin Art Education Conference and hold positions on the WAEA State Board.

Dave Pawl has taught art at Watertown high school since 2001.  He advises the Anime Manga Club.  He Co-Chairs the Carroll University regional of Visual Arts Classic Art Competition along with Doua Vue from Milton, and last year the two also took on the role as State Co-Chairs.  Dave was awarded a Kohl Fellowship in 2007, and Outstanding Citizen Award in 2014, and was 2017 WAEA Outstanding Art Educator at the Secondary Level.  He wrote the first department of public instruction approved visual arts and social studies crosswalk for his AP Art History Curriculum.  For the past four years he also served as Secondary Representative for WAEA and has been President of the Watertown Arts Council since 2007.

Jana Strobel has taught art at Watertown High School since 2007. She has been the WAEA Editor since 2016 and also serves as State Conference Co-chair for the Wisconsin Art Education Conference.  She was awarded AAUW Woman of Merit in 2017, Outstanding Service Award - Watertown Arts Council in 2017, Watertown Arts Council Service Award in 2017, Channel NBC 15 Crystal Apple Award in 2017, and Watertown Elks Club Citizen of the Year in 2021. At school, Jana and her colleague Hillary Lobenstein are co-founders the Gosling Nest which is a free resource for WHS students.  The mission of The Gosling Nest is to model compassion through providing food, clothing, and other basic necessities to Watertown High School students to promote educational success. Outside of school Jana is active in Watertown Arts Council as the Vice-President.  Jana has also been coaching dance for more than twenty years for the Watertown Blue Revue with her mom and sister.